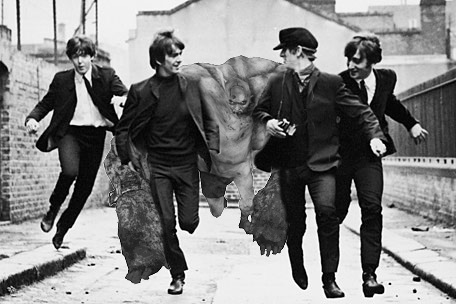 "Last one to the safe house is a punching bag!" Lennon would say.

Okay. I was actually reluctant to write about this but then I stumbled upon a video on YouTube which features Left 4 Dead scenes with a parody of The Beatles’ “A Hard Day’s Night” as its soundtrack. Wrestling against my anti-superstition, I took it for a sign and decided to take a risk by pushing through with this silly idea.


Being a Beatles lover, avid zombie fan and non-sequitur junkie, I put together the most random things in my head, sort of in the same way I’d mix and match clothes to see if they work as an outfit. The Beatles have been hailed as one of the greatest (if not the greatest) groups of all-time. Not only did they stand out as individuals, they were unstoppable collectively. No other band in their time could match their output rate and this shines a light on their peerless work ethic and dynamic as a unit. It’s interesting to see how these guys would fare as a quartet of survivors in a post-apocalyptic setting. So, the Fab Four and zombies? Yup, that’s my ticket to ride.

For simplicity, I’ll bank heavily on the stereotype of each band member. Purists be warned.

Paul McCartney was the cute Beatle, while John Lennon was the clever Beatle. George Harrison was the quiet Beatle while Ringo Starr was the different Beatle. They were the first band who integrated their quirks and personalities into their songs. The dialogue in films like “Help!” emphasized their characteristics as parts and a whole. When it comes to Left 4 Dead (L4D), we get to know the characters through each instance of banter exchanged. For example, we learn that Nick has a shady past and would rather be a lone wolf based on his snide comments and how he relates to the others. As the characters speak, we gain insight into their personalities and interpersonal chemistry.

Let’s imagine the four musicians in a L4D campaign. Paul and John would butt heads, competing for the position of leadership. Given a literal fork in the road, Paul would want to take one path while John would be adamant about the other. They will perpetually strive to one-up each other, whether it’s about their kill count or the kinds of guns they use. Ringo, being the one who hates quarrels, would step in when things get out of hand. Ultimately, his mediation would keep the group tightly intact despite conflict. To the group, Starr is the most dear. This means that if he’s killed, the band would be overly devastated and would vow for vengeance.

George is the most spiritual and would make for the resident existentialist. He would be the group’s bridge to the old world – despite being a skilled slayer (his weapon of choice predictably being the guitar), he still would find it in his heart to pity and pray for the souls of the dead. Throughout the game, he would lament about the poor things and grapple with the group’s purpose for existing in this hullabaloo.

As a team, The Beatles will excel. Though the reality of a Z apocalypse is new to them, the chaos of crowds coming from everywhere is not. Remember, they survived Beatlemania. The only difference now is that those after them are practically brainless and want them dead. So what? They’re big boys – efficient, hardworking and smart. They know each other’s strengths and weaknesses and will play off of them to thrive and survive. All they need is a little help, especially from the players – who will ultimately decide their fate. Four armed gentlemen in suits – you ready for it?

Left 4 Dead: The Fab Four Edition. I’m envisioning a playable map named “Abbey Death Row,” set in scenic locations like medieval castles or the rainy streets of London. Also, a “Penny Slain” campaign – not to mention a difficulty level called “Hellter Skillter.” Additions to the melee weaponry would include the band’s signature Epiphone guitars and drum sticks. Royalty issues aside, their songs will be featured as the background music (I’m open to the possibility of remixing or re-arranging to add the ominous L4D feel). Also, because the band had a notable history of wardrobe phases, their outfits could be featured as unlockable bonus material upon each L4D achievement. Helping Hand? You get the blue coats and hats from the “Help!” album. Zombie Genocidest? “Sgt. Pepper’s” get-up. Tank Busters? The Walrus costume.

I’ll punctuate my ramblings here but I hardly scratched the surface. If anything, I’ve left the lid to Pandora’s Box ajar for your nosy noses to nose into. To this day, the effect of The Beatles on popular culture is so obviously felt and there’s no reason to not entertain the thought of the Fab Four infecting and electrifying the post-apocalyptic scene. It may be an insult for some but the way I see it, it’s one heck of a tribute. Besides, who says you can’t spread love and music in the days of the undead?

PS. The band were also known for their surreal sense of humor as exhibited in this L4D: The Beatles Edition video. Lovely parody.