Louis is a Junior Systems Analyst in Philadelphia, PA for a company called “Franklin Brothers”. His original character concept was an assistant manager at a local electric retail store, but was changed to the IT guy he is now. It is assumed Louis has an interest in video games because of several references he makes regarding other Valve games. He has a figurine of the Heavy character from Team Fortress 2 on his desk at work, and he also makes references to Counter Strike when picking up a gun. He also references Half-Life and complains of not having an Xbox during the Infection. 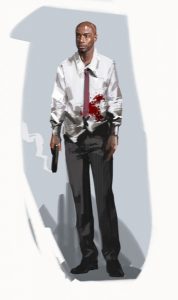 Well, it can only get better, right?