Francis is a bad-ass biker and member of the “Hell’s Legion” biker gang, a gang that was likely inspired by real life motorcycle club, the Hell’s Angel. Francis is covered in tattoos which identify him as a Hell’s Legion gang member. Francis’s character was changed during early development. The current character he is now is rumored to have his face modeled after lead L4D developer Mike Booth. Francis also has the official Valve Half-Life “Lambda” logo shaved in the back of his head to further strengthen this connection.

Francis wears a white tank top with the rest of his clothing being all black, from his leather vest, jeans, boots, and fingerless gloves.

He has a cocky personality and believes he is indestructible. He views the Infection as one big bar fight and loves being able to shoot his pump action shotgun without any law enforcement to stop him.

In early development, Francis was was to have a love interest in Zoey, but this was dropped during play testing. Due to his self-centered personality, Francis doesn’t show much interest in the other Survivors. He views himself as the alpha-male of the group and does have some jealousy of Bill’s leadership. 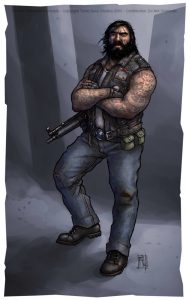